Another 5:00AM start today. We managed to get 15 minutes at the buffet breakfast this morning – but by economising and stuffing our faces in such a short window, we gave ourselves indigestion at the airport, which was no fun in a long immigration queue. Never mind.

Unlike the last flight, today’s was quite smooth. We chatted to a nice Malaysian bloke who worked in Singapore, and he seemed to take quite a shine to Tarryne. Also discovered that Changi airport is absolutely massive, but perhaps not as big as Dubai. Navigating this on our next trip is going to be fun.

After checking into our rather dystopian-looking hotel, we headed straight out. Food-wise, I’m delighted to find how readily available tofu and soy milk is! Soy milk is actually cheaper than it is at home, which is convenient for me. I haven’t seen many of the famed hawker stalls selling decent veg food yet, but I’m sure I will.

This afternoon, we took a long walk around the city centre, and saw a fair amount. First stop was Arab Street, an area which historically was inhabited by many Middle Eastern and North African Muslims, but they are difficult to find nowadays. It’s a cool restaurant and shopping area, a place I could imagine myself spending hours looking around all the lovely little shops. In a way, it was very similar to the Brighton Laines or Camden Market, so perhaps that’s why I liked it so much. The only down side was the fact that prices were also pretty similar to home. We didn’t come to SE Asia to be poor again!

Next up was Raffles, the poshest hotel in town, named after one of these white colonial (problematic) “heroes” like Kipling. I’m surprised the doormen didn’t kick us out for looking too sweaty/chavvy, but hey, guess we were lucky. Just to say we had, we popped into the toilets. I was disappointed – no nice soap, no hand towels, and the bogs themselves weren’t even that clean. I was expecting Ritz standards, and I got Premier Inn. At least they aren’t holes in the ground like many of the other toilets in this part of the world.

I already love Singapore. I’ve always wanted to come here, for some inexplicable reason, and now I’m here it feels awesome. I even think I saw part of the Singapore Grand Prix track – it’s a street circuit, and some of the lights were industrial strength, running past city hall. Watching this on the TV was probably what attracted me to the city in the first place. We walked a little further into the city centre via the old colonial district. Modern Singapore ft. White Man: 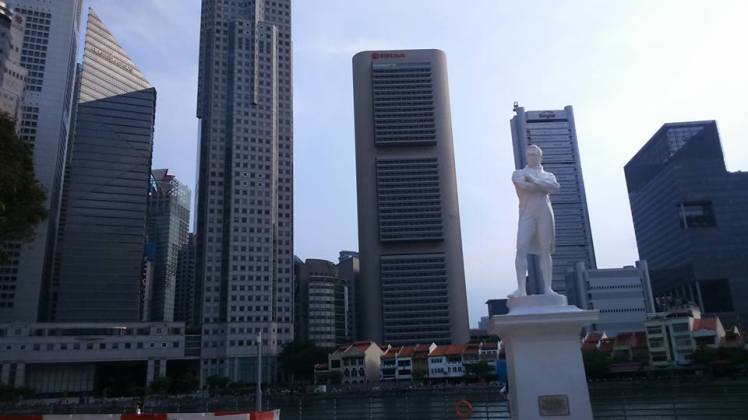 The highlight of my day (and possibly holiday) was an impromptu visit to Singapore’s first cat cafe, which we happened to walk right past. The ladies who ran the place were very friendly, and the cats were even better. As they were all rescued from the mean streets of Singapore industrial estates, you’d think they were afraid of human contact. Wrong. They were so playful, and a couple of them even sat on my lap. My crazy cat lady senses went into overdrive, and at one point I lay on the floor motionless, utterly in my happy place. Ended up spending quite a bit of money in there on souvenirs…

(Tarryne’s photo, or weird family portrait, as I like to call it)

An evening walk through the financial district and Arab Street took us back to our hotel. One restaurant salesman asked us if we wanted to try Turkish food. It’s similar to Greek food, so I suppose I have, but it’s strange to think that certain European foods like Greek, Spanish, and Levantine foods are considered exotic here.

Unsure what we’re doing tomorrow, but I’m sure we’ll find something cool and unique in this fascinating city. More pictures to follow!