Driving along the empty Andalusian motorways, one might be forgiven for thinking you’re in the American desert, not one of the busiest tourist traps in Europe. But such is the Costa del Sol, in places. We left our hotel for the intricate Moorish city of Granada, via a beautiful beach I’d found scouring ‘off the beaten track’ tourist blogs.

A lover of Greece, I wasn’t entirely impressed with Spanish beaches, from what I’d seen on the web. Why do people come here to these beaches (only marginally better than Sandbanks, I thought) when they could come to Greece? I love snorkelling, and wanted to find somewhere I could relive the same feeling of flying I felt at Elafonisi, my favourite place in the world. Period. After much deliberation, I settled for Playa de la Rijana, on the coastal road about an hour from Granada.

We parked in the car park up the cliff, and walked down the dirt path through a dark tunnel to the beach. With absolutely no facilities, save a bar that was closed when we were there, it was still full with locals enjoying the sunny weather. It’s rocky, so it’s not perfect, but the water was beautifully clear.

It was a bastard to find on the satnav. I had to trace the coastline and find it from that! I’d suggest using Google Maps to anyone looking to visit.

I set down my stuff and jumped straight in, Poundland snorkel in hand. I’d like to add at this point that you should definitely not buy snorkels from Poundland if you don’t want to drown – invest in a slightly more expensive one. Water kept filling the eye goggles, but eventually I managed to get them to 75% work.

The water was filled with shoals of black and silver fish, which you can swim through as they part. I could have stayed for hours watching this underwater world, but it was hot, and we had to get on. Sad that I had to go, but happy my hard research paid off, we clambered back up the cliff and into the car.

Passing through mountains and lovely reservoirs, it was hard to believe the drive to Granada was only an hour. What was stressful was getting to the hotel in Albaicin, aka the old town up the hill. Many a time we couldn’t fit the car down the street because it was physically too small. That said, it’s a beautiful district, with fantastic views of the iconic Alhambra. 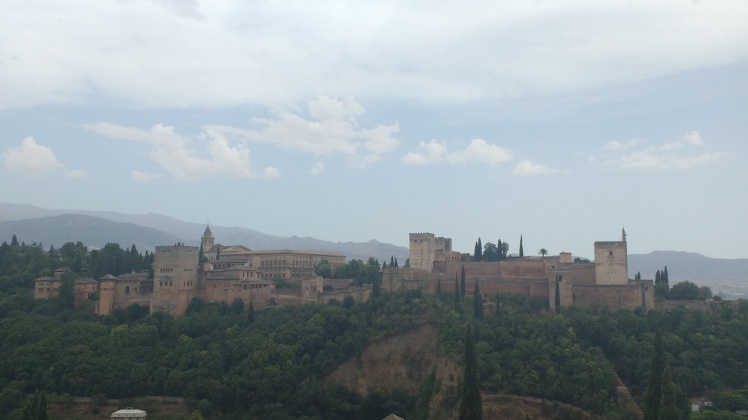 Now, to any bugger reading this who wishes to visit the Alhambra, I have three words for you: BOOK IN ADVANCE. We realised we had to do this only about 3 days beforehand and all tickets were sold out online, and we couldn’t get them on the phone, in the bank, nowhere. We had only one option: Get to the ticket office by 5:30-6AM, and get in line with the tourists who had slept there overnight. They release a certain number of on the door tickets, but only 400, so you really do have to get there early.

My family let me go ahead, as I am a speedy hillwalker after living in Bristol. I got there and got a space, and already started feeling anxious as I saw the number of other committed tourists there. But all we could do was sit in the queue and wait, so that’s what we did.

As ticket office opening times neared, the collective queue got a little itchy. But we’d come so far, and couldn’t give up now. We’d spoken to people in the queue, and formed a weird sort of bond. We all cheered as we were handed our tickets, and we headed into the gardens.

Another advantage of getting there so early is that you can capture the beauty of the symmetric gardens, before the other tourists ruin it for you.

If you have to get there for 5:30AM anyway, might as well go all out and look nice.

The palace is beautifully carved and laid out, beyond all imagination. It’s also vast, so you’ll need to commit at least 4-5 hours to enjoy it in full. There are four different sections to explore: the garden, the Christian palace, the famous Moorish residence, and the castle’s fortifications.

Definitely not the most impressive view, but an atmospheric one. 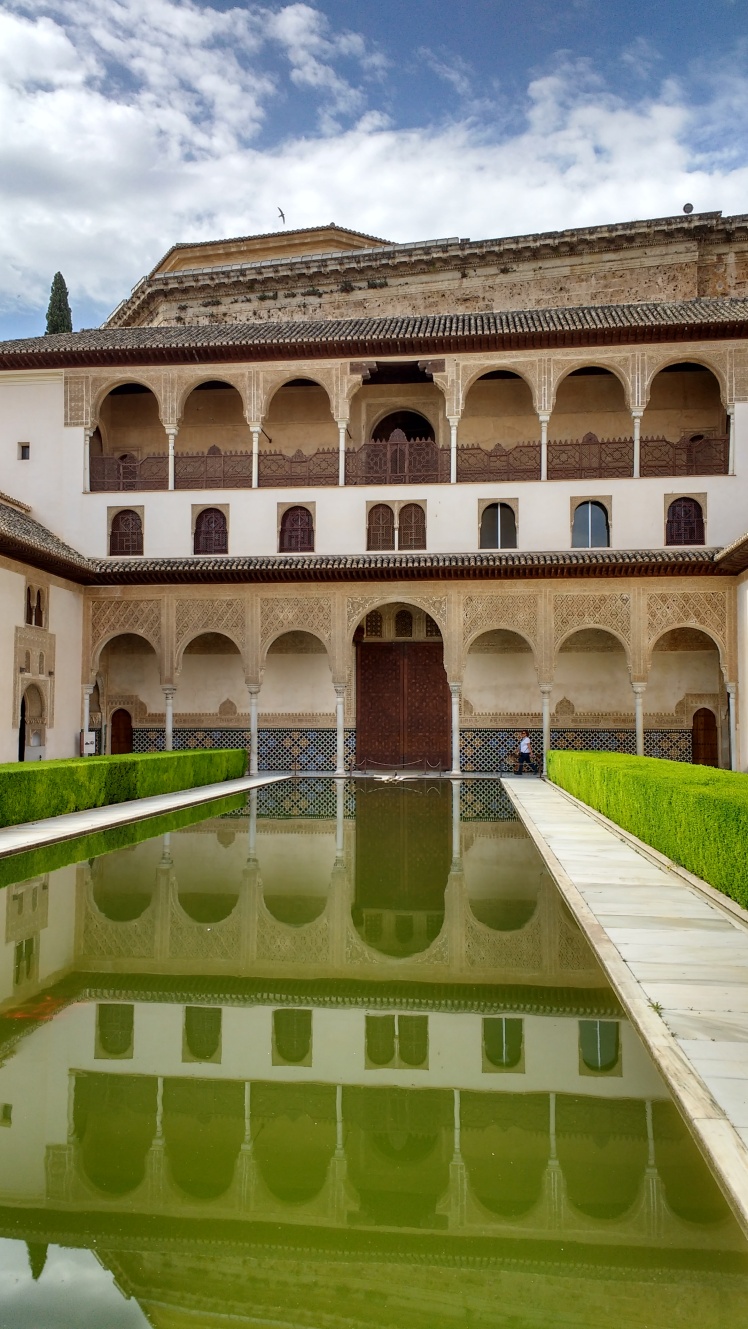 Perfect symmetry, aside from that bloody tourist.

The fort had great views, but wasn’t half as incredible as its next-door neighbour.

The entire site is also patrolled by a population of adorable kitties, some of whom don’t mind being stroked and adored by visitors. They’re skinny, but fed and watered, and evidently exist to keep the mouse population down. So it doesn’t upset me like the cats in Greece do.

Chilling out, maxing, relaxing, all cool.

The rest of the afternoon was spent meandering around Granada, doing our souvenir shopping and inspecting the old souk. This was a hidden gem we had no idea existed – admittedly they all sell the same things, but it’s nice, pretty stuff (not the ugly tat you get in Camden these days). The man my mum bought a load of things from even gave us relatively good discounts, and seemed like a sweet enough bloke.

Islamic style souvenirs by the shedload.

That evening, we felt like a little drive, and felt like some mountain air. Granada is just half an hour’s drive away from Europe’s southernmost ski resort, so we went there, despite the fact our petrol was running low. The mountain roads wind higher and higher, and passengers get a glimpse of sheer cliffs and reservoirs along the route.

When you reach the summit of the pine-lined road, you’ll find yourself in a small resort. Since we went between ski season and summer camp, it was totally deserted. We took a few breaths of air, but decided to get down the mountain before it got dark, and go in search of fuel.

Besides, as you can see – there’s a storm coming.

The car beeped at us to tell us we only had a few miles left in the tank. But where were we going to find petrol, we all wondered as we sat tensely in the car. Thankfully, one emerged on the horizon to save our bacon, and we returned to our hotel happy.

Packing our bags for the airport, we slept, and the next day left for Madrid-Barajas. It’s a four hour drive, so probably wouldn’t recommend doing it, but it can be done. We stopped off at a pretty town for a walk and some mediocre churros – Tembleque.

Only mad dogs and Englishmen go out in the midday sun. Not sure which one I am, but I’m certainly one of them.

Arriving at the airport and checking in to our flight back to Brizzle, we realised our flight was to be populated with annoying Spanish foreign exchange students, who always travel in large groups. And apparently take up the entire hand baggage allowance for the plane – ours had to be checked.

I enjoyed Spain and Portugal, and picked up some banging new tunes for my MP3 player. I’d like to think that dad’s Spanish DNA (20%, not sure where from but definitely a medieval thing) passed on to me and that’s why I like Spanish language music so much, but in truth I think I’m just a pasty Brit with a good ear for happy dance songs.

Next week, I’m travelling to Iceland, which will be quite the contrast. And freezing cold, probably. Brrrrr… take me back to 40 degree heat, pronto!

One thought on “5AM wakeups: Granada”