I should probably come up with some more SEO-friendly titles, but everything I write is so deeply personal to me that I just can’t help but roll with the awful puns and weird jokes. Sorry, not sorry.

After racing frantically around Vienna’s Hauptbahnhopf to get a McDonald’s (I’ve kissed goodbye to their amazing veggie menu for now), I made my train with a few minutes to spare. I died of shock when it arrived at the platform 5 minutes late – how unlike a German train – though technically it was OBB, and therefore Austrian.

Whizzing through the nondescript Austrian countryside reminded me of the wonderful experience I had interrailing. I love to travel but very much dislike flying, so when they’re not deathly expensive (thank you government for privatising British rail) I’ll always take the train. In Europe, they’re so reasonable and fast it’s hard to justify flying between nearby major cities. Again, thank you borderless EU travel.

While there is no border between Austria and Hungary now, up until very recently, there was one so impermeable that death was a more likely outcome than crossing. I am talking of the Iron Curtain, which once demarcated the border between ‘capitalist’ Austria and ‘Communist’ Hungary – though these are seriously overly simplistic terms.

The impact of years of totalitarianism is still visible on Hungary, with its ill-maintained, dilapidated buildings and unique, nationalist political mindset. Even from the train, the Soviet-style railway stations, grubby-looking industrial estates and poor rural housing are telltale signs of the country’s tumultuous recent history.

Likewise, Keleti station in Budapest was looking a bit worse for wear. I didn’t want to dwell there, though, because I wanted to get to my accommodation. It was hot AF and I had three heavy bags to carry – primarily because, as a Brit, I didn’t actually believe it was going to be sunny until I got there, so packed some winter clothing *just in case*.

One of the main reasons I came to Budapest was to try out youth hostelling. True, I’ve also come to see the sights I missed last time, but primarily I wanted to see how the other young people do it. I love to travel with other people, but it can be a frustrating process trying to coordinate and cooperate, so I thought I’d just try going by myself. However, I always have a burning desire to share my thoughts and opinions, so I didn’t want to get too lonely.

Enter the youth hostel. I’ve only ever stayed in one once before as part of a couple, and it was in Amsterdam, so probably wasn’t the best place for my first foray. I booked into Maverick City Lodge in Budapest this time, on the basis that it has great reviews and was very clean. I can’t say I expected the bedroom to look like an adventure playground, though: 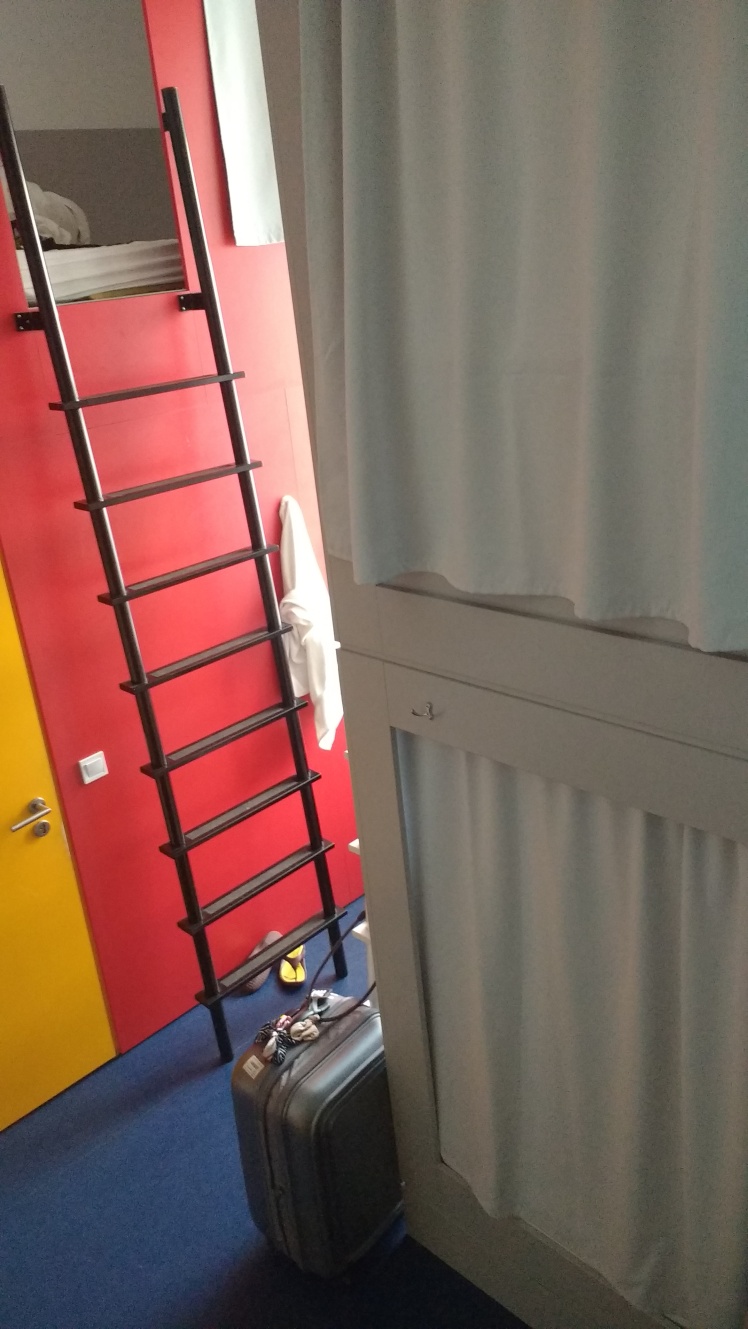 Imagine climbing down this at night, after you’ve had a few drinks…

The hostel has indeed been clean and quiet – almost too quiet. It’s not very sociable. Perhaps I’ve just come at a bad time, but I had expected to be hanging around more with people I’ve met here. Certainly I’ve had pleasant conversations with people, but you’d think solo travellers would be looking for other solo travellers to buddy up with.

The problem has been compounded by a number of factors – 1. the hostel doesn’t have a bar, which is essential to meeting people. 2. There’s a group of about 60 German teen choir singers here,  and it would be weird to try and talk to them. 3. Everyone seems to be here as part of a group or pair! I think next time I’m really going to have to research the social life of a place. And also not be a lazy shit and force myself to go on pub crawls, even though I’ve never been a big drinker.

Anyway, if you, dear reader, want to go anywhere or know anybody that does – hit me up! I’m always looking for travel buddies. I’m never going to get a mortgage at this rate.

First on my list of shit I missed last time is Vajdahunyad Castle, in Budapest’s city park. It’s not actually very old – it was built at the turn of the 20th century – but it is impressive. It’s like a gaudy, Disneyland mix of architectural styles, with baroque, romanesque, renaissance and gothic all in one go. 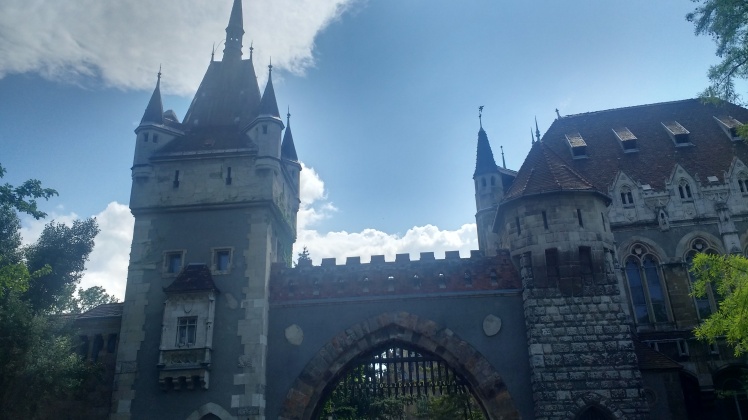 Built as part of an exhibition celebrating 1000 years of Hungary, it was originally made from cardboard and wood. Now it’s made of stone, thankfully.

I went for the big combination ticket so I could explore the whole thing. I went up the gatehouse tower (pictured above), then clambered up 150 steps to the top of the ‘Apostles tower’. You get a good view of the city from up here, but you have to go with a guide, and tours are on the hour every hour – so be sure to time it right. 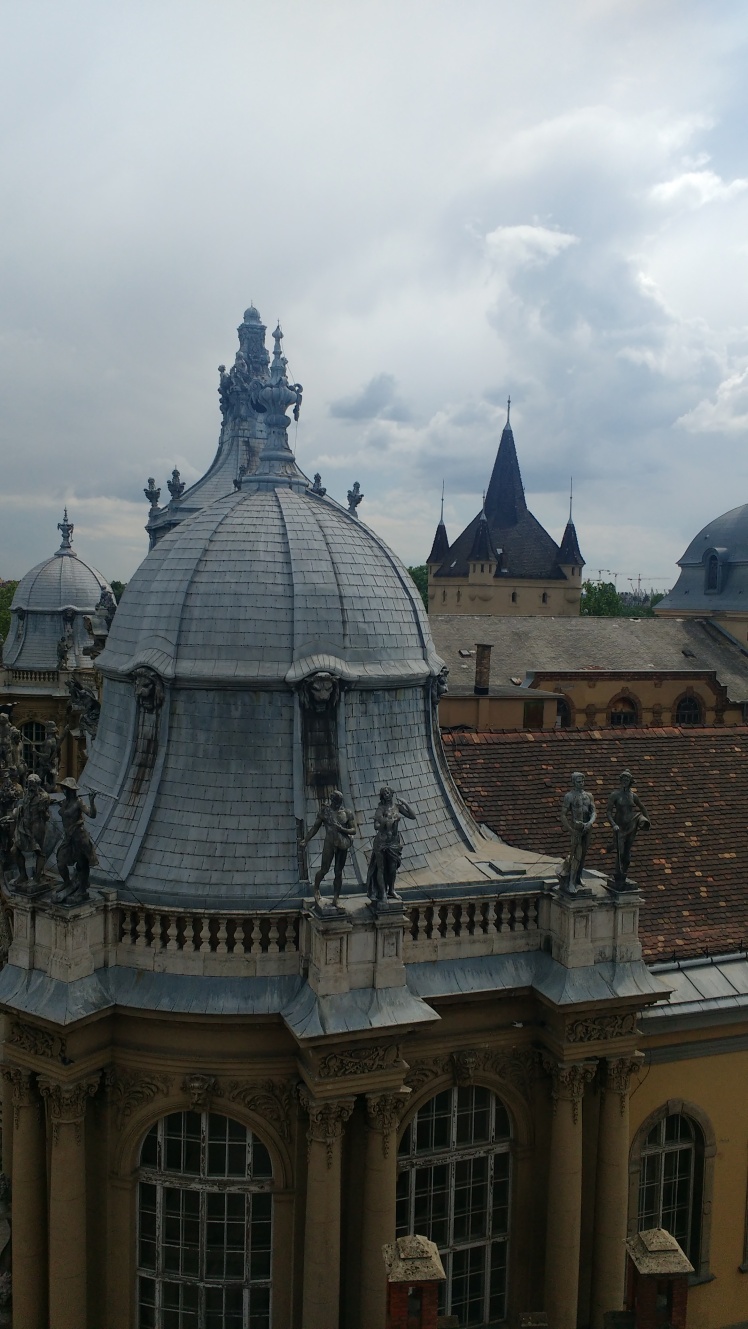 This wasn’t built until the 1950s, but it looks much older, which I thought was clever.

I wanted to nose inside the baroque building, which contains the Museum of Hungarian Agriculture. It’s about as exciting as it sounds, but also includes a million and one dead animals. As a veggie, this wasn’t a pleasing sight, but the interior decor of the building was quite grand.

It also seemed that I’d come on the day when every school in Hungary was having a trip to this museum, so at one point the entire lobby was swarmed with excitable 8 year olds. I am really no good with kids, so for me this was quite alarming. The museum wasn’t even that interesting, so lord knows why they were there. If any travellers are reading, I would only buy a ticket to go up the two towers, not to go inside the museum. You can see the architecture just from the lobby, and you won’t have to pay 1000 extra forint to look at some taxidermy. 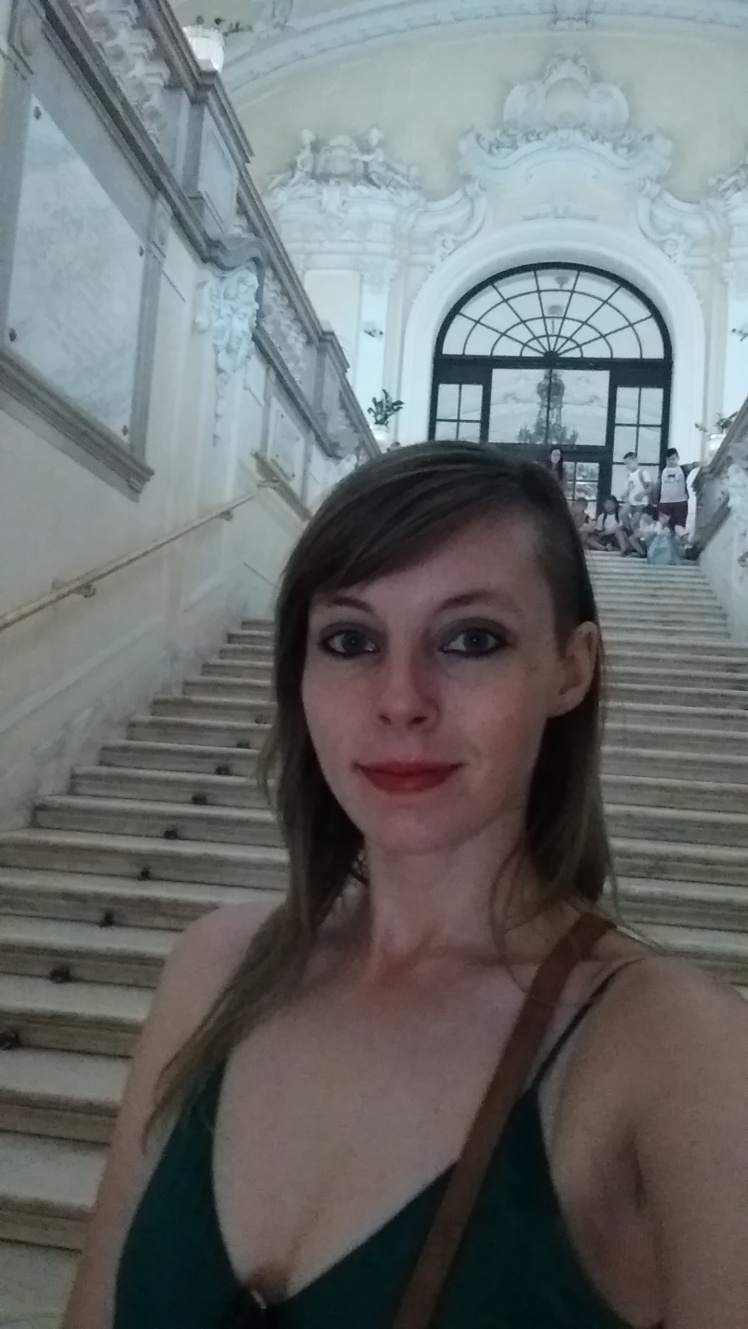 Schoolkids ruining my selfie on the grand staircase, bastards.

A more interesting museum soon beckoned. The House of Terror was something I’d not bothered with before, because for some reason I assumed it was like London Dungeons, or the shortlived Saw Maze in Thorpe Park. It’s actually more like the Stasi museum in Berlin, and shows visitors how political terror operated in 20th century Hungary. 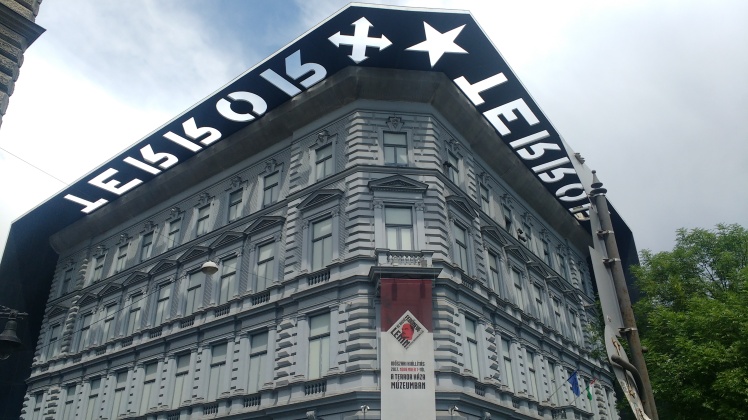 Covering the period from the Nazi occupation to the USSR era, this building was home to a variety of sinister characters, such as the ‘ministry of loyalty’ and the secret police.

While waiting in the queue for half an hour – pre book your tickets, people – I was faced with a piece of the Berlin wall, one of the most prominent symbols of dictatorship in the world. I’m not sure what it was doing in Budapest, but best not to question it. 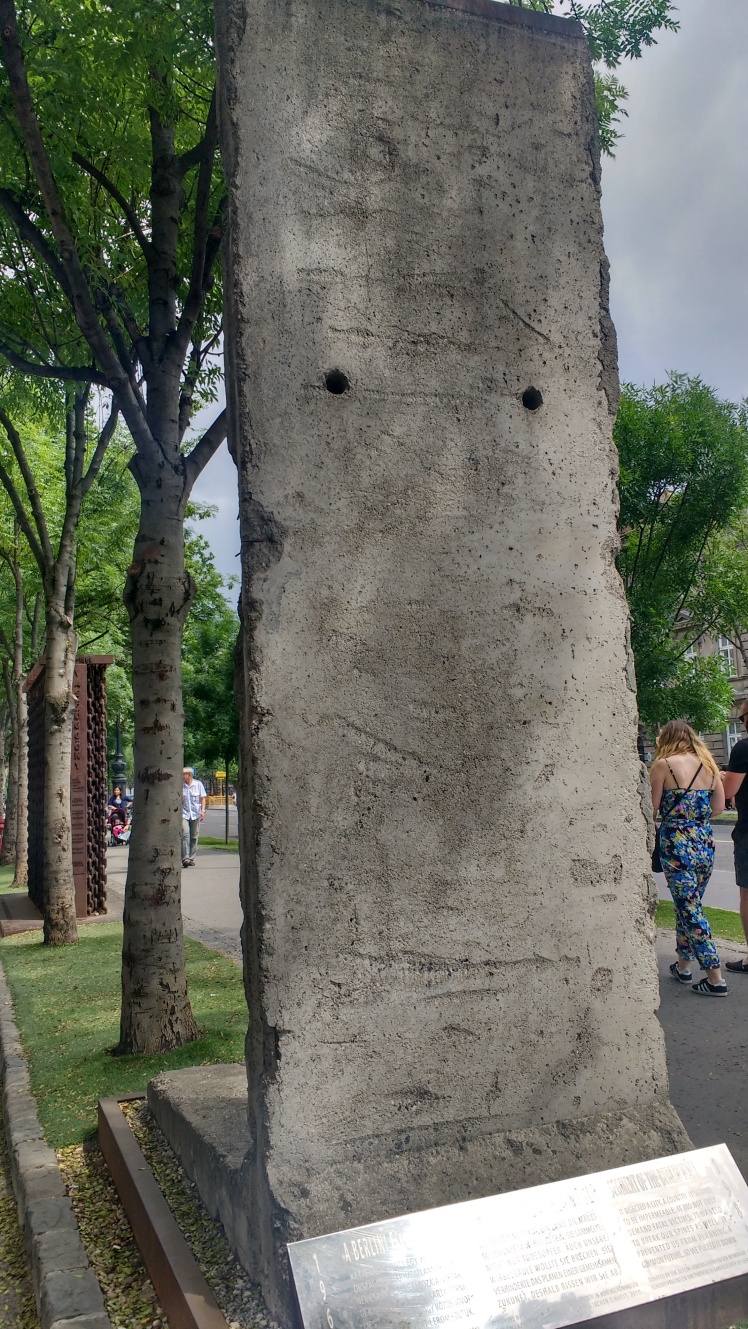 You weren’t allowed to take pictures inside, so I’ll describe it. You start on the second floor and work your way down to the basement, which was turned into a jail for political prisoners. The story begins during the Second World War, giving you some context on Hungarian history. It then proceeds to talk about subsequent fascist – and finally Communist – governments, that used brutal tactics to keep rebellion in check. One of the tipping points was the 1956 Hungarian revolution, which saw Hungary go from being a satellite state of the USSR to a fully-fledged part of it. The museum shows you instruments of torture, murder, imprisonment and espionage, all used to enforce Soviet rule.

I find stuff like this fascinating, as I do most history, but this museum was interesting for another reason. There was no audioguide, so every room was stocked with A4 sheets of paper you could read. I’m not sure who’d written them, but there was a massive nationalist undertone in there. The huge suspicion of anything left-wing, coupled with vast sweeping statements about the Hungarian people, Russians, the West etc, made me think that these sheets of A4 were not the most reliable source. Something about information injected with passionate emotion makes me distrust it.

All of this animosity might be down to the fact I was really hungry, and really annoyed there was no audioguide. I don’t have the time or energy to be reading large blocks of text while I’m on holiday (it’s literally my job to proof read large blocks of text), and most of it wasn’t even relevant to the artefacts in the room, so most of them lost their impact and meaning. It’s a good museum, but they need to make much better use of audiovisuals, and just have labels in English by most of the exhibits, really.

Anyway, off I set for some grub. I struggled to find veggie food while I was in Budapest last, but I remembered there was a small franchise called hummusbar, which serves plates of – you guessed it – houmous. 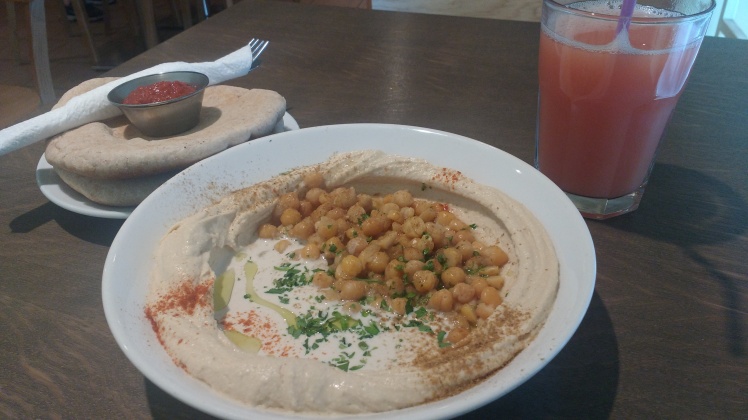 It was very tasty indeed, and reasonably priced – but actually I found it was just slightly too much food! They told me it was healthy, though, so I wolfed the whole thing down and rolled back to the hostel.

Before long, I was on a local bus, on my way to do the thing I love most about Budapest – hot springs. There are about 7 or 8 thermal baths to choose from – all of them far cheaper (and better) than Thermae in Bath, I’ll bet – and I love them. One of my aims in life is to do all of them. Last time I went to Szechenyi, this time I went for the second biggest one, Gellert. 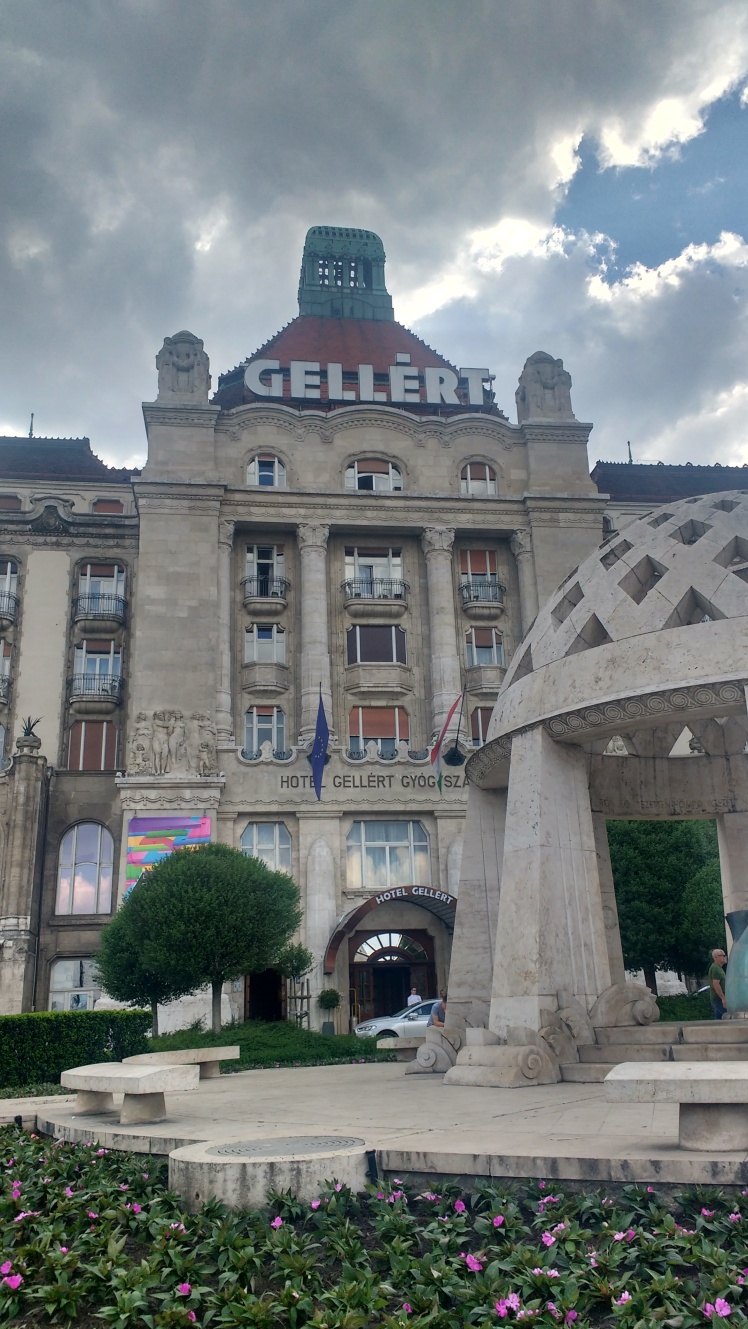 It’s round the back of this posh hotel.

Across the Danube in leafier Pest, this bath is much smaller than Szechenyi, but it’s perfectly formed. It’s all decorated in beautiful Art Nouveau style – my favourite architectural movement – and it’s got ten pools, both indoor and outdoor. There are two large swimming pools, plus the usual thermal baths, and some bloody freezing mini immersion pools if you want to bathe Scandi style. I’m not a fan of being cold, so I passed on that one.

It also has a wave pool. 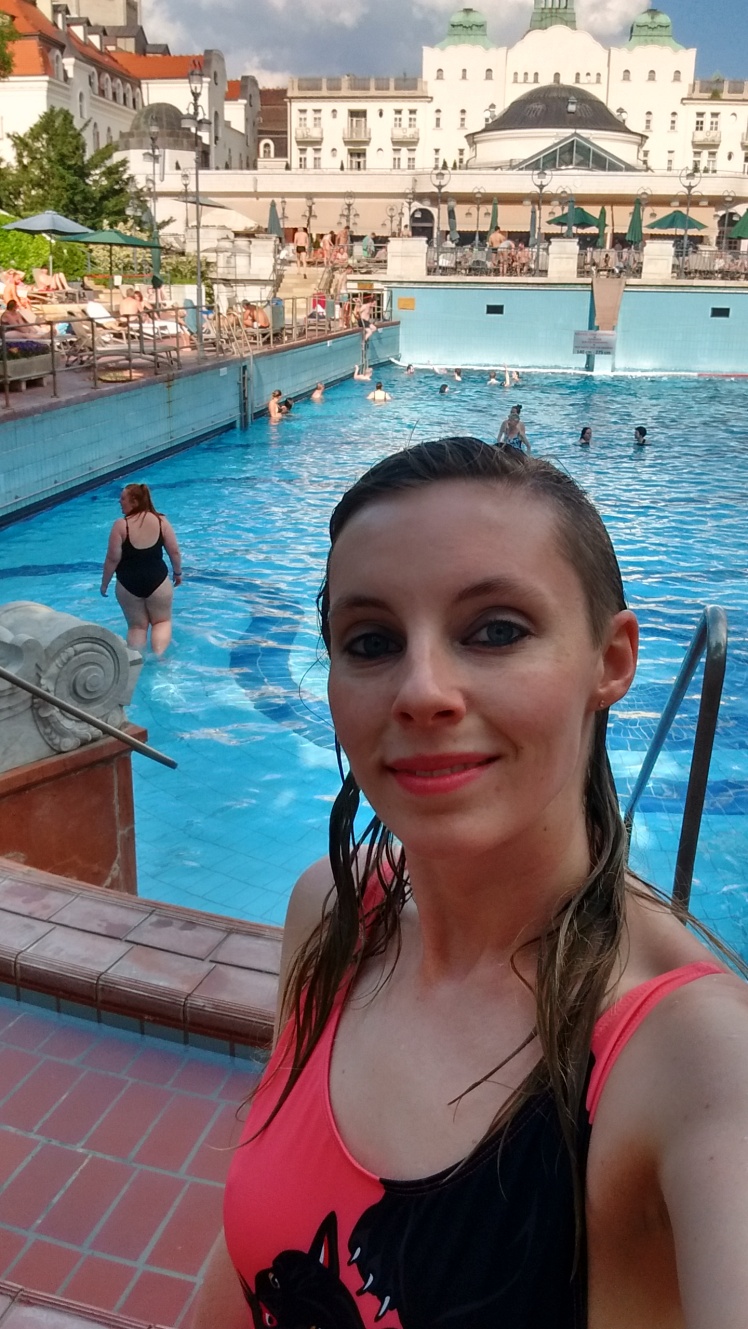 I really need a friend to take photos for me. I couldn’t see a bloody thing when I took this.

I’m basically just a big kid, so the wave pool was the first thing on my agenda. It was just the most fun, ever. It’s so exhilarating to be carried on the crest of a wave, surfing on the water until you get thrown into a nice American couple (sorry, guys). And then running back into the fray to do it all again. 10 minutes of pure, unadulterated fun.

And how better to relax from some high-intensity cardio than to bathe in a warm, mineral-rich pool? I went in search of the perfect temperature – I like it hot – and settled on the 40 degree bath. There I got chatting to someone from India, and they were very surprised I knew where Madhya Pradesh is. I confuse myself, sometimes, mate.

We explored the lovely complex together. 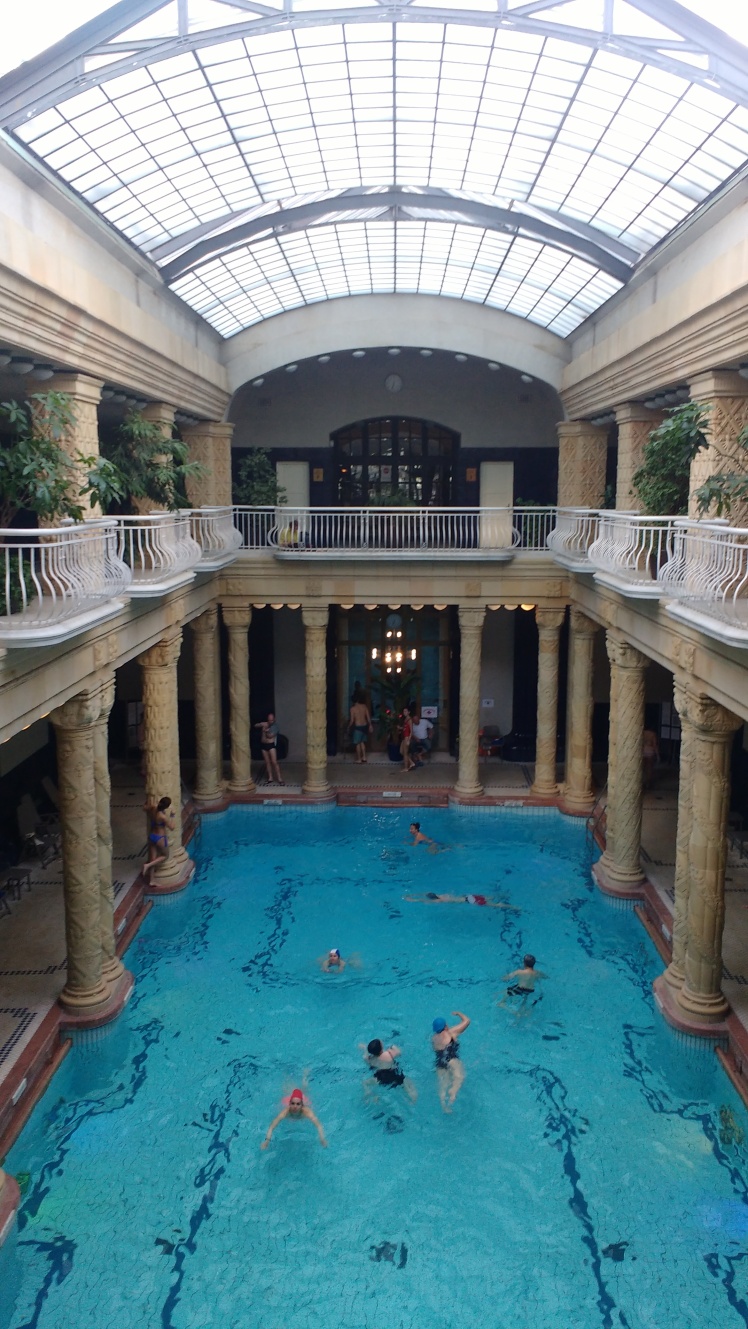 Alas, due to stringent European customs, I couldn’t go in the main pool because I didn’t have an ugly ass condom hat.

I knew it was time to leave when my skin wrinkled like a prune, but I went only very reluctantly. Swapping contact details with my new pal, I was supposed to meet them for drinks later on, but I was too relaxed and sleepy after my spa afternoon that I simply fell asleep. I’m not very good at this YOLO lifestyle.

Today I head back to cold England. Booo. But my brief tour of central Europe has been delightful, and has got me dreaming of another Interrail trip before the discount runs out when I turn 26. Better get a shift on with the planning, then.

4 thoughts on “Hangry in Hungary”