“Thessaloniki at all costs”, shouted the great Greek statesman Eleftherios Venizelos, when asked whether his army should reclaim Greece’s second city, Thessaloniki, from the Turks, or another crucial target. Though these words may have been uttered a hundred years ago, they still go a long way in showing just how important this city by the sea is for the Greek nation.

I was most excited to come here, because it’s at the very heart of everything I am nerdy about: European relations, the Ottoman Empire, and the current beef between Greece and Turkey – which has its roots in 20th century trauma. If you’re not familiar with the story of this incredible place, I shall break it down for you:

Who said History degrees are pointless?

The first thing I notice about the city is its fantastic waterfront, which is lined with coffee shops, restaurants and bars – but not the tourist trap ones. Real places where locals congregate to catch up with mates, flirt with other annoyingly beautiful young people, or relax and enjoy the view. Thessaloniki doesn’t attract a massive amount of international tourists, and I think this helps make the city truly authentic. 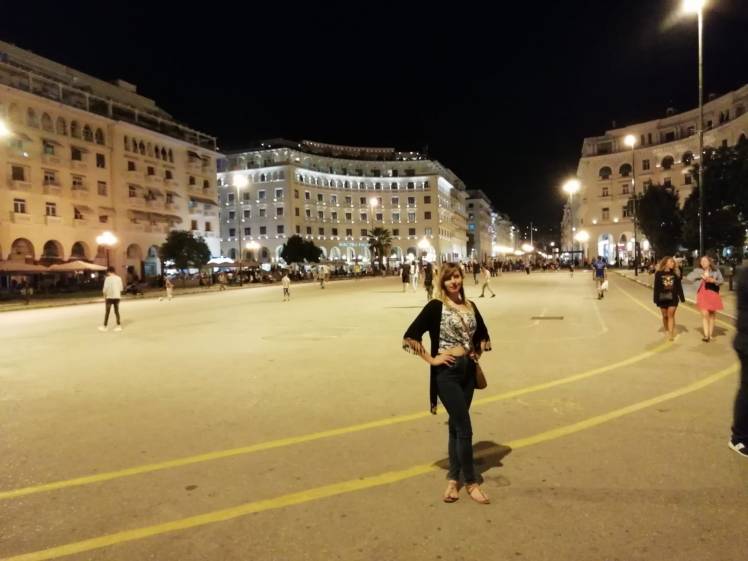 Even the main city plaza, Aristotelous Square, is buzzing with local life in the evenings. I tried to play football with some kids who kicked their ball at me, but it missed my foot by a mile so I had to walk on and act like I *meant* to do that.

The lack of tourist crowds, however, mean I’ve been using my rudimentary Greek a fair bit. The first sight I had to see was the White Tower, an Ottoman prison they’ve whitewashed so it looks less bloodstained from all the executions that happened there. It’s at the end of Thessaloniki’s waterfront promenade, and has become the city’s iconic landmark. There’s a museum inside the tower, but all the information inside is in Greek.

I ducked under the doorway and asked for my tickets, in Greek of course. The staff there demonstrated that once again, Greek people are simply the best. My Greek was a little broken, but they smiled, knowing that I was genuinely trying to learn. They explained the situation r.e. the info boards, but I explained my reading skills were far better than my speaking or listening skills, so I’d be happy to give it a go – which surprised them. They even allowed me to practice some more Greek on them before I headed into the foray. That’s another thing I’ve noticed about Thessaloniki – they are especially enthusiastic about tourists, particularly if you attempt to speak the language.

Rambling aside. Here’s a photo.

‘White Tower’ was the best name they could think of? Imaginative.

Thanks to my existing knowledge of the city’s history and basic reading skills, I got the gist of the exhibition, but it was too hot to stay that long. Besides, that wasn’t what I came for – I came for the 360 degree panoramic views of the city. 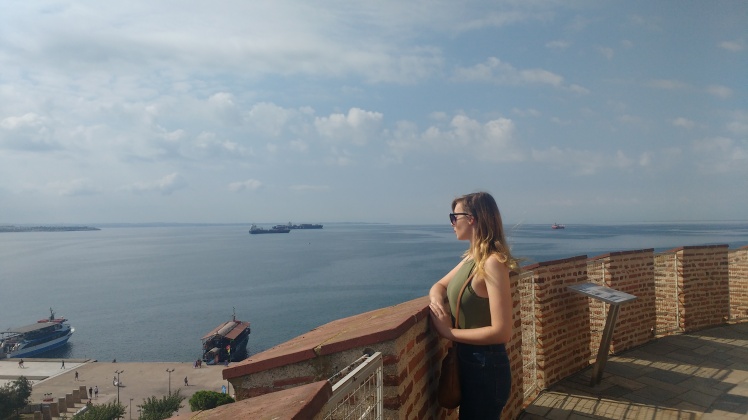 And be vain and take selfies, of course.

Like most Greek towns and cities, Thessaloniki is a sea of white buildings on a parched beige background, bordered by mountains, which give way to the beautiful blue sea and sky. Some of the things you’ll notice from the top of the White Tower are the pirate ships that sail in the bay (some of them are floating bars), the promenade, the medieval fortress on the hill, and the gridlocked city below. Almost directly below, you’ll find this guy: 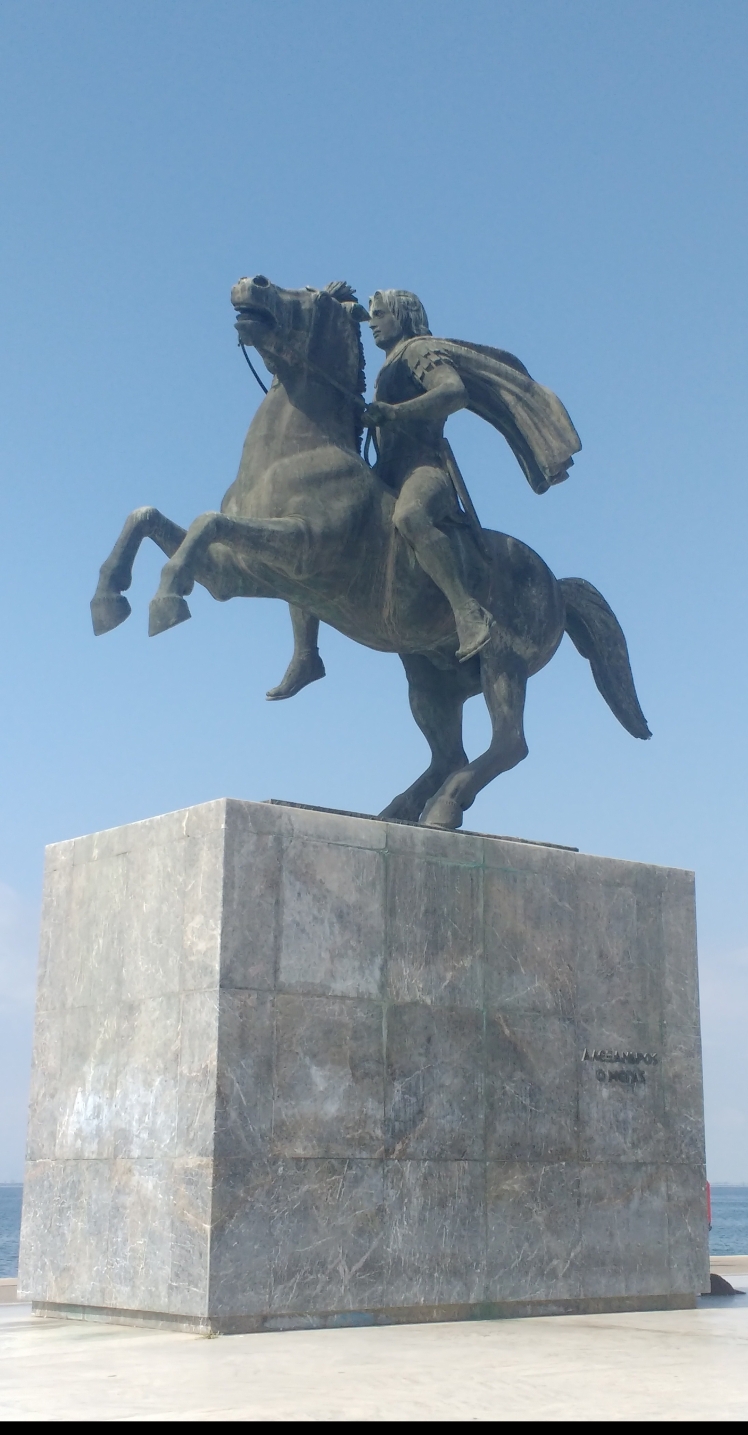 “Alexandros o Megas” – I’ll let you figure out what that means.

If you’ve been keeping up to date with Greek politics, you’ll know that recently, Greece and the Former Yugoslav Republic of Macedonia finally actually agreed on something. What’s that, you ask? Well, Greece really hates that its northern neighbour is capitalising on the whole ‘Macedonia’ thing, as that was where Alexander the Great’s homeland was. After 20 years of arguing, they finally agreed that FYROM could be called ‘North Macedonia’, to distinguish it from Greek Macedonia, a region of which Thessaloniki is the capital. Though it might seem like Greece has bigger problems to worry about right now, they steadfastly refuse to have anyone else claim what they see as their exclusive heritage. TL;DR Alexander the Great is a big deal around here.

Jumping ahead in time, I headed for the city’s Roman history. Cue the Arch of Galerius and adjacent ‘Rotunda’.

Is it a mosque? A church? A Roman temple? Actually, it’s all three.

These monuments were built in the 4th century AD, just as the Roman Empire was on its last legs. It collapsed shortly after they were finished, so Emperor Galerius’ palace, archway and rotunda became Byzantine landmarks. They decorated the Rotunda with all manner of Christian bling – the roof features some of the finest golden mosaics anywhere in the world. However, both myself and my phone are incapable of taking decent pictures, so you’ll probably have to Google that for yourself.

Then, when the Ottomans came, they loved this circular, empty space. All they had to do was build a minaret and a wudu basin, and there you go, you’ve got yourself a mosque. It remained this way until it was re-Christianised, and ultimately turned into the museum we have today. It was an impressive sight, considering it was only 2 Euros.

Walking a little further up the hill, I wanted to see the Ataturk Museum, which is where the creator of modern Turkey, Mustafa Kemal Ataturk, was born. I stopped to take pictures outside, but sadly didn’t go in, because it looked rather closed.

Fun fact: the Ottoman Empire was so diverse, that the first Turkish PM was actually born in Greece.

Rounding the corner, I noticed that the museum was connected to the Turkish consulate complex. It was surrounded by corrugated metal fencing about 20 feet high, and guarded by an entire van of armed police. It’s clear that the divisions between Greece and Turkey are far from healed.

The thing about Thessaloniki is, there is so much history to the place you’ll trip over it if you aren’t looking carefully enough. For example, I accidentally-on-purpose found myself faced with a ginormous Roman forum. Anywhere else in the world, it would have been the star attraction… but in Thessaloniki, it’s just one of many.

This is only the ampitheatre. The ruins of the market complex sprawl out for about 2 blocks behind it.

After snapping some pics, I got into the time machine again (i.e. walked to a slightly different part of the city) and went into the Byzantine Haghia Sofia church. No, not the one in Istanbul. They’re just all called that around here. 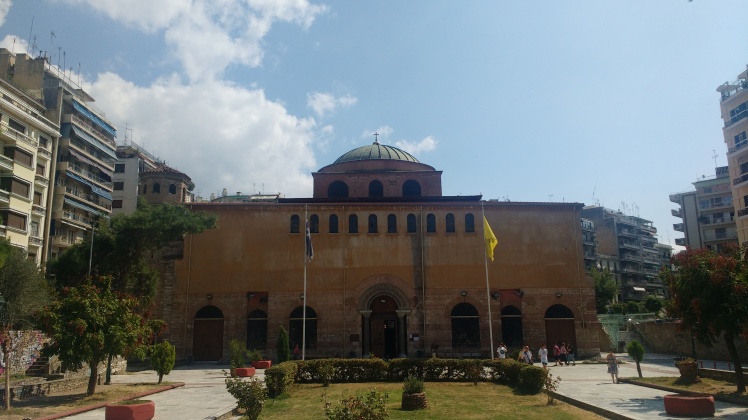 The orange brickwork and massive doors are a real contrast to the apartment buildings around it.

Unlike many other Greek churches, it’s distinctly dark inside. Sure, it’s still as ornate as it possibly can be, but it’s dingy. Usually they tend to be light, bright and airy, but this one is evidently the exception that proves the rule. Still, I saw fancy chandeliers, intricate pulpits and candles galore, so I can’t really complain.

Now, I think, it’s time for some lunch. But I run into an old friend first.

That’s my homeboy Eleftherios Venizelos. I took an interest in him at university, so much so that they paid for me to come out to Greece and study him some more. He led Greece in an era of change, and doubled its territory and population. I found his personality fascinating, and the impact he has on the Greece of today is profound. Even in the tiniest town, you’ll find his name plastered in lights. Probably because without this charismatic Cretan, many of the fabulous Greek places we know today wouldn’t even be Greek without him. I doff my Cretan cap to you, sir.

I tore myself away from him because my stomach was getting angry with me. Last year, my friend Konstantinos took me to a place called Falafellas, and I was really craving those deep-fried chickpeas. After walking about a mile along Egnatia Odos (a famous Roman road, now paved over and one of the city’s main thoroughfares), I found a little place. Again, my Greek came in handy, and I am really patting myself on the back when I say I managed to get even further with my language skills. It’s all good for when I eventually move here.

The way to my heart is through my stomach. Thessaloniki has certainly made it there – its food scene is famous around Europe.

Last but not least, I thought I would check out the Jewish district, since this is the only city in Europe where Jews were once a majority of the population. They even had their own language. Sadly, much of the district burned down in a fire in 1917, meaning that all that remains are modern buildings like any other. The Jewish community was also slaughtered in World War 2, when many Greek Jews were sent to concentration camps by the Nazis. I wanted to look round the Jewish museum, but sadly didn’t find the time.

Thus ended my historical walk round Thessaloniki. 15,000 steps later, I’m currently slumped on the sofa for a siesta, but I’m excited to go out again – maybe to one of those lovely bars I was talking about. Or maybe to an ice cream parlour. Only time will tell.

One thought on “Alice vs. History: Thessaloniki”