I’ve not even seen 300, but of course, I know all about this iconic scene. After receiving an inflammatory message from the Persian king Xerxes, king Leonidas of Sparta boots the messenger into a deep pit, exclaiming he will not be merciful because This. Is. Sparta! (All done in a Glaswegian accent, of course, because historical accuracy was not the top priority in this film).

The scene of the showdown between the Persians and the Spartans took place at Thermopylae, which at the time was a small pass jammed between the mountains and the sea. For the modern day traveller, it’s conveniently located on the motorway between Athens and Thessaloniki, just outside the city of Lamia.

The real story is this. Xerxes wanted to invade Greece because he already had a big empire, and wanted a bigger one. He came through Turkey and what’s now Thessaloniki. A union of Greeks from the south – including Spartans, Athenians, Thespians and some other terrifying Peloponnesian warriors – came to meet Xerxes’ army, with a far smaller force.

They blocked the pass, and due to a combination of bad tactics and crap weapons, the Persians couldn’t get through. Until they bribed a local to show them a way through the mountains, coming up to the Greeks’ rear. While everybody else sensibly ran away very fast, 300 Spartans (and 400 Thespians) stayed behind to fight until the last. Yep, they all died, including Leonidas, but it’s their bravery (read: many of them were slaves and therefore forced to fight anyway) that’s lived on.

What gives Thermopylae its name is the site of a natural hot spring that pours out of the mountain, providing shimmering blue water almost like bathwater, but also giving off the horrible stench of rotten egg because of the high sulphur content. Urgh, it’s like Iceland all over again. 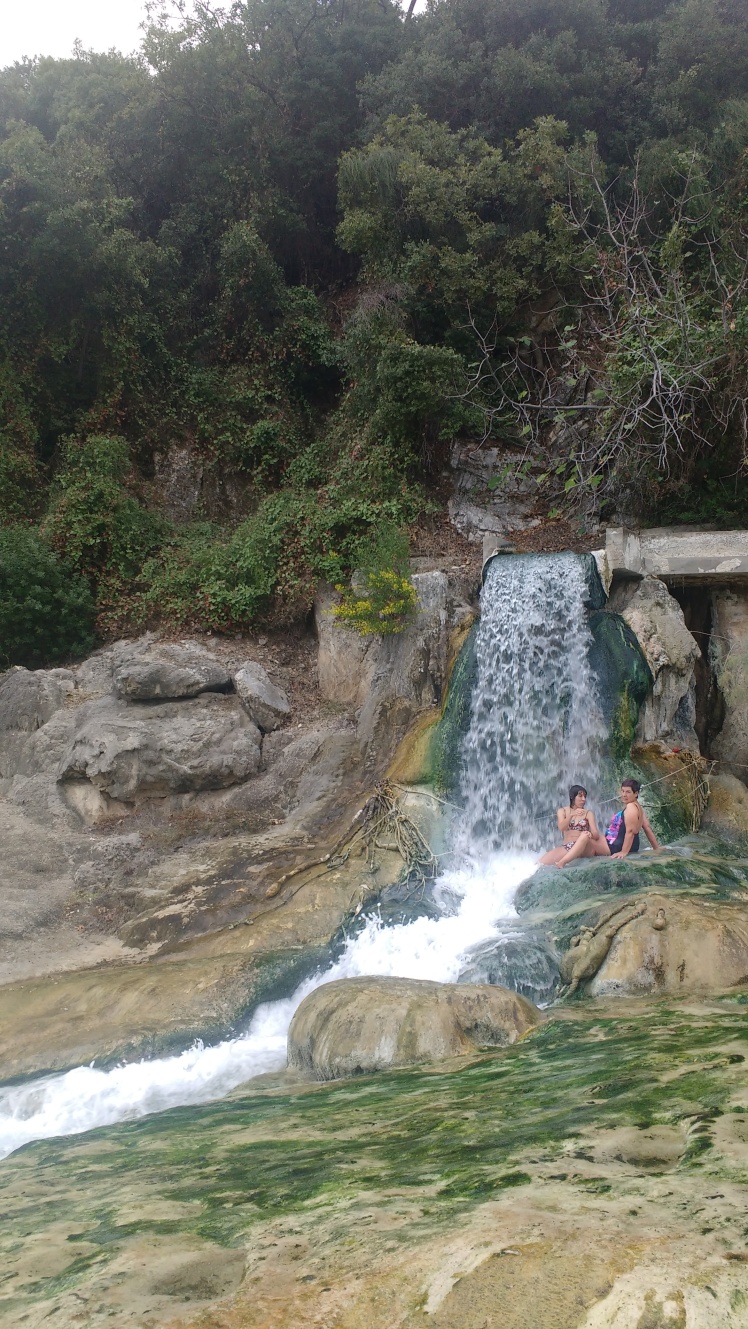 These brave, bikini-clad souls got in my photograph.

But there was something far more horrific at these hot springs. Just a few hundred metres from the waterfall is an abandoned hotel complex, which is being used as temporary accommodation for hundreds of Syrian refugees. Due to its location and proximity to the conflict, Greece has been the first port of call for many families fleeing the appalling fight in their war-torn homeland. Now, tens of thousands of people are stranded in Greece, as the EU and many adjacent states have since closed their doors to refugees.

Accommodation is often ramshackle, poorly built and quite frankly unsafe. The Greek government (like most other governments in Europe) offers little or no help to these people, often using police brutality to enforce itself. I even saw a police car come into the hotel complex to arrest what looked like a child.

Reading up on the place, it’s even more awful inside than it is outside. It’s overcrowded, access to food and healthcare is limited, and there’s little in the way of facilities. Not to mention the fact it smells appalling because sulphur pours in through every crack. Sadly, this appears to be one of the ‘better’ refugee centres in Greece – there are 3 nurses who come to visit daily, and what looks like a small library/school run by some Dutch volunteers. But the government hinders them at every turn, failing to process their asylum applications and giving only the bare minimum in terms of food.

I know I probably sound like one of those preachy ‘gap yah’ types, or a Comic Relief appeal. I’ve got no idea how to solve the crisis and don’t pretend to. But these people deserve better than the racist, disgusting treatment they have thus far received from Europe. I’ve heard it said that solidarity is one of the best ways to show your support, but sadly I think the first step on that road is simply convincing many white Europeans to see these people as human beings, not criminals or money-grabbing immigrants (though even if they did come for a better life, what’s wrong with that?).

I feel I’ve said all I need to on that topic for the moment, so I’ll jarringly break with that subject and switch to another. What you really came for was to see the battlefield of Thermopylae. Well, so did I, but there’s nothing to really mark where it is. As far as I can tell, it’s a field of lumpy-looking rock just off the road, with a hill at one end of it. I believe this hill is where the 300 Spartans – and their Thespian pals, because let’s not forget those guys – made a final stand, and were killed by a volley of arrows. 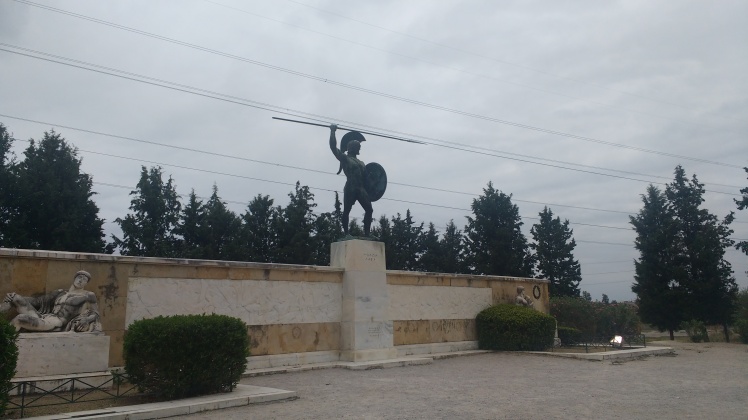 This giant statue of Leonidas is across the road from what I think is the battle site.

I’m no expert in Ancient Greece, and only learned all of this because I went to the museum and watched the world’s worst CGI movie. The place is cleverly disguised as a motorway service station with a cafe and toilets, but you have to pay 3 Euros to get in. The guides are very friendly, though, and keen to show you round the museum. One funnelled us into this budget 3D cinema, where we watched a ten minute video about the battle. It gave me a headache, but I am far more knowledgeable about the battle now than I was before.

He also invited us to take pictures…

Look, I’ve got Leonidas’ sandals on and everything. Now it’s me that’s kicking HIS ass.

Better informed about the battle – and about the refugee crisis – I headed back on the road to Athens. Athens’ traffic is infamous, and for good reason – it took a ridiculous amount of time to get the 8 kilometres from the motorway to the apartment, driving through Syntagma Square and other main thoroughfares. But I’m here now, and ready to explore some new bits of the city I haven’t seen before, including the city’s Pakistani district. And also to have a drink in lots of rooftop bars, because they’re one of the greatest things you can do here. Having a cocktail while the sun sets over the Acropolis? Perfect way to spend an evening.